I am one of the many former Voice of America (VOA) journalists who were refugees from communism in East Central Europe and the former Soviet Union. I talk by phone with some of my former VOA colleagues or follow them on Facebook. Most of them are now retired but still quite active as journalists, commentators and writers. Strangely, I don’t see any of them being asked by VOA to comment about various refugee and immigrant issues in the United States or abroad. I think I know why they are being ignored. They are not fooled by propaganda of the new left. The risk of them pointing out similarities between communism and fascism effectively bans them from being quoted by VOA.

More sadly, the legacy of former anti-communist VOA journalists who are no longer living and who had made the greatest contribution to the fall of communism has been now almost completely forgotten by the Voice of America management and most of its current editors and reporters who are progressive activists and even describe themselves as such. Today’s VOA pays a lot of attention to immigrants, but not to refugees who have fled from under the rule of communist or state-socialist regimes.

Many of these immigrants and refugees from communism are quite liberal even by American standards but they are not progressive enough for the Voice of America as it has evolved during the last decade. This may change under new Trump administration-appointed CEO of the U.S. Agency for Global Media (USAGM), but the Voice of America is still dominated by managers, editors and reporters who glorify communists such as Angela Davis and Che Guevara and who purposely ignore the voices and experience of VOA’s former journalists from countries behind the iron and bamboo curtains or any strongly anti-communist, anti-Marxist or anti-socialist immigrants or political refugees.

I can honestly say that the Voice of America has returned to the inglorious legacy of its founders, including first VOA Director John Houseman and first VOA chief news writer and editor Howard Fast. They were Soviet sympathizers, fellow travelers or, like Howard Fast, future Communist Party members. In 1953, Howard Fast received the Stalin Peace Prize.

The VOA management has never acknowledged this part of its history and instead continued to deceive Americans with a false narrative that early VOA officials and journalists were completely committed to truthful news reporting.

The truth is that they followed in the footsteps of the 1930s Pulitzer Prize-winning New York Times correspondent in Moscow Walter Duranty who lied for Stalin and covered up his crimes. World War II VOA officials and journalists did as well. This changed when these pro-Soviet and pro-Stalin journalists were replaced by refugees from communism during the Cold War, but in the last ten years under Obama administration officials, the Voice of America again has moved far to the left. The VOA management quickly forgot about its anti-communist legacy of the Cold War period and about VOA’s contribution to the fall of communism in East-Central Europe and in the Soviet Union. The VOA Charter, the U.S. law which requires the Voice of America to be balanced in its programming, has been cast aside by the management and by some VOA editors and reporters.

If today’s VOA managers, editors and reporters want to learn something about communism, all they have to do is to talk to some of the former VOA journalists from Eastern Europe and the Soviet Union, many of them highly respected and honored in their home countries. Their immigrant view of what is now happening in the United States is almost always quite different from what many Voice of America current programs present to foreign audiences and increasingly also to Americans who are already exposed to foreign and domestic partisan propaganda from other sources.

One of my former VOA Polish Service colleagues who is a talented and well-known Jewish-Polish writer and has been very liberal all his life despairs the growth of antisemitism among the left elites in America and is appalled by violent demonstrators loosely inspired by Marxism. They may be just “spoiled children of the bourgeoisie,” as Nobel Prize Polish poet Czesław Miłosz called some of the student protesters at the University of California at Berkley where he was a professor in the 1970s as a political exile. Some former refugees from communism today see, however, a much greater danger to free speech, free media and political freedom from the current cancel culture movement as it promotes slogans and behavior reminiscent for many of them of the Cultural Revolution in communist China under Chairman Mao. This was also the experience of Central East European liberals like Miłosz, the author of The Captive Mind, in which he described the successful brainwashing and self-deception of intellectuals who initially embraced Marxism. Some of the Central European refugee journalists who were at one time VOA broadcasters are more liberal than most native-born Americans who call themselves liberals or progressives, but their experience of living under communism makes them fearful of the left’s totalitarian group hate and censorship impulses.

Another one of my former VOA Polish Service colleagues told his friends that he no longer feels safe in the United States and thinks about moving back to Poland with his U.S.-born wife despite their rather advanced age. Yet another former VOA Polish broadcaster is trying to renew Polish passports for her and her U.S.-born husband, fearing that a complete anarchy might ensue in America. Another former VOA Polish Service journalist wrote to me that he sees anarchy already but his wife is too ill for them to contemplate moving anywhere else. I have not seen a single VOA report reflecting such sentiments which are now quite pronounced among some ethnic and immigrant communities in the United States.

These former VOA refugee journalists are not openly or overly partisan. None of them posts on social media in favor of President Trump. I should add for the sake of balance that one former VOA broadcaster we know does post virulent attacks on Trump although some of us remember our former colleague as being quite reactionary and right-wing some years ago.

I’m convinced that the voices of former Voice of America journalists who are immigrants in the United States and refugees from communism have been ignored in VOA programs because these journalists know from their own experience that group hate and silencing critics and debate is just as strong and just as dangerous on the left as it is on the right.

From time to time, I write about the broader issue of ideologically and partisan driven biased journalism in the age of social media. The new technology made propaganda journalism much more widespread, but it is not a new phenomenon. In an op-ed in The Washington Examiner, I reviewed briefly Polish director Agnieszka Holland’s film Mr. Jones about a courageous young Welsh reporter in pre-World War II Moscow. He was almost alone among hordes of Western correspondents who at that time were “pimping for Stalin with disgusting single-mindedness,” to use a phrase made known by British anti-Nazi and anti-communist writer and journalist Rebecca West. If there are any Mr. Jones’ or Ms. Jones’ at the Voice of America today, they have been effectively silenced even though this U.S. taxpayer-funded media organization is required to present a diversity of opinions reflective of the entire America, including its anti-communist refugees and immigrants. 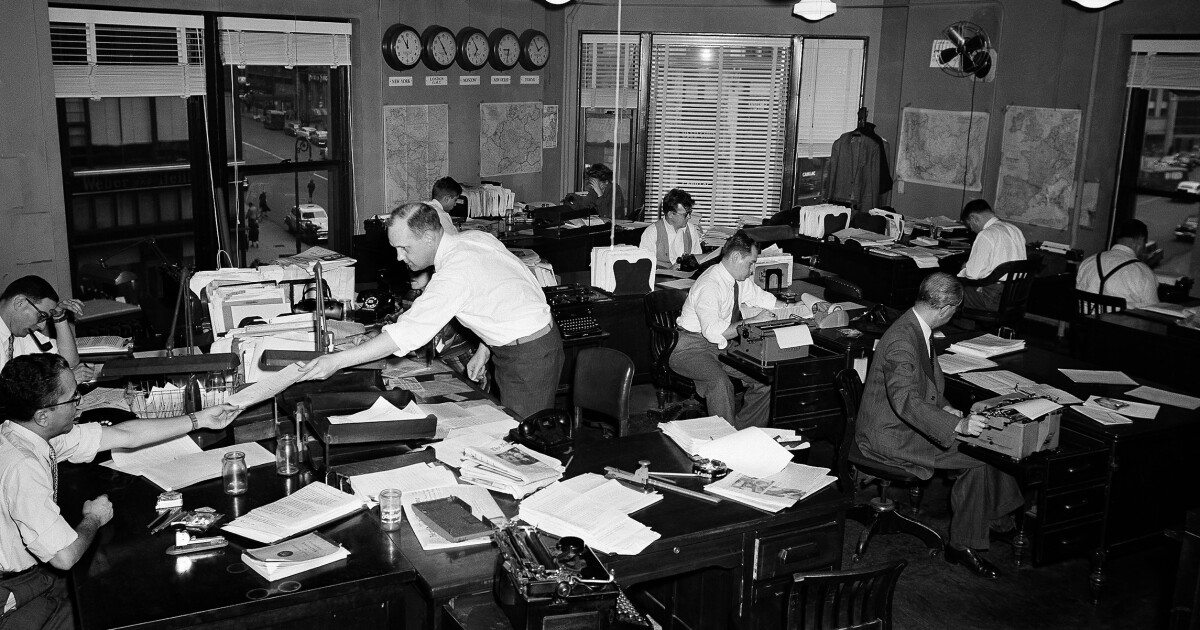 Voice of America’s forgotten Mr. Joneses
After watching Agnieszka Holland’s film Mr. Jones on Amazon Prime, I highly recommend it to every journalist at the New York Times, the Washington Post, and other liberal media outlets. I especially recommend it to those working at my former U.S. federal government employer, the Voice of America,…
Total
22
Shares
Share 22
Tweet 0
Pin it 0
Share 0
Tags: propagandaSoviet UnionTed LipienVOA
Previous Post

Alleged Cronyism At USAGM Before Michael Pack Exposed By Whistleblower