Galina Timchenko, a Russian journalist and executive editor of Meduza, a Riga, Latvia-based independent online news site, harshly criticized the Russian Service of the Voice of America (VOA), which is managed by the $800 million U.S. Agency for Global Media (USAGM),  for reporting inaccurately that Meduza is closing down due to pressure from President Putin.

Under essentially the same senior and mid-level leadership at the Voice of America and the U.S. Agency for Global Media, the VOA Russian Service has experienced multiple scandals, including charges from an independent Russian media expert in 2011 of having a “pro-Putin bias” to posting a fake interview with Russian anti-Putin opposition leader Alexei Navalny in 2012, as reported by NPR and other U.S. media.

None of these scandals over a period of more than ten years, which also included employing until last year a Russian-language TV anchor and reporter who had previously produced anti-U.S. propaganda videos with antisemitic conspiracy theories, have resulted in any major management changes at the senior levels at VOA, the VOA Russian Service, the VOA Eurasia Division or at USAGM. Prior to becoming in January 2021 the current acting USAGM CEO, Kelu Chao was for many years the VOA Program Director. With other senior VOA and USAGM executives also occupying their positions for many years under changing VOA directors and USAGM CEOs, management and programming scandals have continued, including recent reports of plagiarism by a VOA reporter and charges of spreading of pro-Ethiopian government propaganda to downplay accusations of genocide and other human rights violations in Ethiopia.

Democrats and Republicans in Congress have stepped up in recent weeks their criticism of the USAGM and VOA senior management while still praising the work of Radio Free Europe and Radio Liberty (RFE/RL) in Belarus and in Russia. RFE/RL, which is increasingly micromanaged by USAGM bureaucrats, struggles to maintain its semi-independence and higher journalistic standards.

Meduza is the most popular independent online news outlet in Russia, particularly among the younger Russian-speaking audiences.

In a Facebook post, Timchenko asked about the VOA report on the closing down of Meduza, “do you really think that if that were true, you would have learned about it from the Voice of America?”

In an interview with Forbes Russia, Timchenko said that the Voice of America “listens to bullsh**.” She added, “you can write that.” 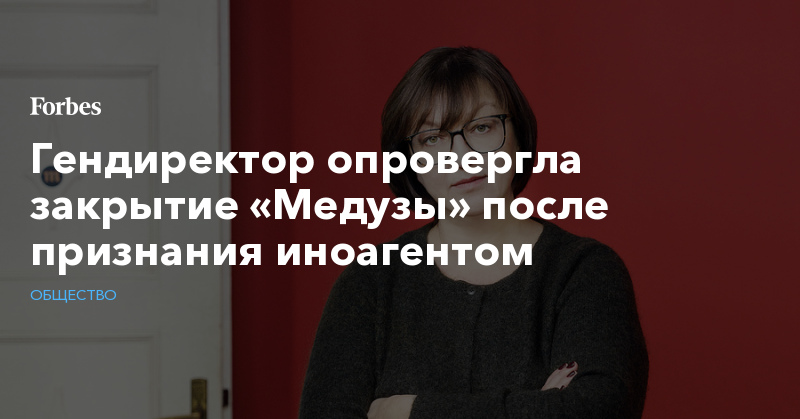 Timchenko told Forbes Russia that the Voice of America has mischaracterized her June 7 online presentation organized by the Kennan Institute at the Wilson Center in Washington, D.C. In her presentation, Timchenko said that shutting down in response to the Kremlin’s foreign agent law was briefly considered, but it was not what Meduza journalists and management have decided jointly to do. Almost all of her Wilson Center-Kennan Institute presentation was about how Meduza is resisting pressure to shut it down, protecting its journalists, and continuing to serve its readers.

“It was about the first days when we learned about the status of a foreign agent, then I really thought about dying, but the publication does not close and continues to work,” Timchenko explained.

Timchenko made it clear multiple times in the one-hour long presentation and discussion that Meduza is finding new ways to receive financial support from its users and advertisers and has no intention of closing down due to the growing pressure from the Kremlin against independent media.

The Wilson Center also summarized Timchenko’s comments in a completely different way from what made it into the Voice of America report.

On April 23, the popular Russian-language media outlet Meduza was labeled a “foreign agent” by the Russian Ministry of Justice and suddenly faced all the risks and problems associated with this status, including the loss of advertising income. Three weeks later, Meduza, which is headquartered in Riga, Latvia, reported that nearly 80,000 people had joined the crowdfunding initiative to save it. Galina Timchenko, a prominent Russian journalist and CEO of Meduza, considered what new challenges to free speech the Russian media are currently up against, how government pressure affects today’s media development trends, and what motivates independent journalists to continue working.

The Voice of America Russian Service report on Galina Timchenko’s Wilson Center presentation about Meduza was subsequently removed from the VOA website without any immediate explanation or an apology from VOA.

Kevin Rothrock, managing editor at the English-language edition of Meduza, wrote straight out on Twitter that the VOA editor responsible for the headline about Meduza should be fired. He added: “By the way, I don’t advocate firing people lightly, but this kind of reporting is irresponsible and amazingly stupid.”

A prominent European expert told USAGM Watch that it was “indeed a huge scandal” that the U.S. government-funded Voice of America reported that Meduza was about to shut down. A journalist with a long experience in reporting about Russia provided this comment:

I think there were two reasons for such criticism [of the Voice of America Russian Service report]. I have the feeling that the people at VOA have misunderstood Galina Timchenko. She admitted destruction of their [Meduza’s] business model following the Kremlin’s decision to assign to them the foreign agent status. But on the other hand, they [Meduza] were quite successful in fundraising and have enough money to continue the process of restructuring. Some of their old video projects produced as part of Meduza were relaunched as independent YouTube videos without the Meduza logo.

Secondly, the VOA report quoted her as pointing out the Kremlin’s effectiveness in the fight against independent media and opposition groups. That was at least storage. Imagine how happy they must have been in the Kremlin reading [in a Voice of America report] that the opposition media outlet chief is admitting the effectiveness of their strategy.

I can understand Meduza’s people’s anger. From their perspective VOA report was a favour to the Kremlin, which is doing its best to destroy the opposition media.

In a Facebook post, Galina Timchenko again said that the Voice of America presented her views crookedly (криво). She added that someone from VOA called her and apologized and that the apology was accepted.

Dear esteemed readers and colleagues! I began to receive questions about the “closing”. I understand that it is alarming. But do you really think that if it were so, you would have learned about it from the “Voice of America”?

I have NOT GIVEN interviews to this outlet [Voice of America]. They summarized my lecture crookedly. I admit that my English is far from perfect, and it is hard to hear on Zoom, but, I hope, still not so much.

See how the material that everyone is now quoting ends: “We promise that we will continue to work if you, the readers, support us.” This quote is correct. It is a pity that it was not included in the [Voice of America] title.

We are working. Thanks to the support of our readers. And we will work as much as we can. Thank you all for your concern. loved ones. But here I am. The editorial board is here. Chief editor at the post.

We are with you because you support us.

PS They called from the Voice [of America]. [They are] Correcting now. Apologies are accepted.

Disclaimer: Parts of this commentary include unofficial Google translations.